What is dialogue-based journalism?

The concept ” dialogue-based” originates from the very first course with a conversational approach at DMJX.  In this first course, which took place almost ten years ago, the focus was on monitoring the “conversation” on social media – and merging journalism into this conversation (journalism as a community service). Today the dialogue unfolds offline as well as online. We have kept the term “dialogue-based” as this term implements the ambitions in the principles described below (Madsen 2012):

Our approach to dialogue is production oriented versus reception oriented. The aim is not to count user clicks or keep track of how long time the audience has spent with a story. The aim is first and foremost to bring audience into the news production process from idea to evaluation, to make citizens participate in the creation of stories, to include diverse voices, to be aware of problems relevant to the audience, and to listen to what the audience wants. Yet still remain critical.

Integrating dialogue in this form in the journalistic work process develops both the relationship and the conversations that journalists have with sources in general, and the conversations they facilitate between  people with different views on matters.
Dialogue-based journalism wants to empower and engage citizens to overcome feelings of hopelessness and of alienation from society. 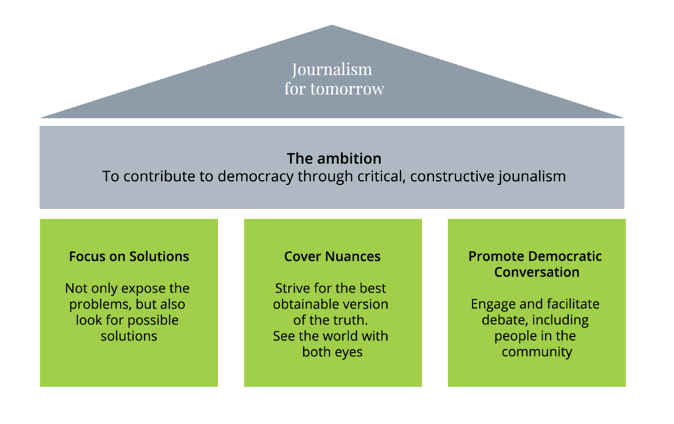 In this framework, the most known pillar, solution oriented journalism, is only one of three, even though people often believe that constructive journalism and solutions journalism is one and the same thing.

The second pillar is where the  thoughts of Swedish Professor and statistical pioneer Hans Rosling appear, as well as the concept of “complicating the narratives”, as Amanda Ripley puts it: To make difficult and polarised topics MORE complex with more nuances, and to remember the big picture when we are covering progress.
The third pillar expands the idea of the journalistic role. We have a broader role than the watchdog and the storyteller. You can also “contribute to democracy” in the role of a moderator, a mediator, a facilitator, a mobiliser or a collaborator, just to mention some important roles.
The focus in pillar three is to further a democratic conversation. You can do this by engaging people in a community in the entire journalistic process and by creating new ways of debating. And this is where the idea of dialogue-based journalism comes in.
You don’t have to engage the community in a conversation on solutions. But you can. And you don’t have to look for the nuances (the second pillar) alone in the dialogue with people. But it often makes sense to do so.
Therefore, dialogue-based journalism is not a journalistic genre. It is a new and extended journalistic approach, which requires some additional methods and tools.

A lot of these approaches originate from the 1990s´ public journalism, and emphasise the importance of including the audience in the production of journalism, and engaging and facilitating an open dialogue (see the Dialogue-circle).
Other contemporary trends seek journalism with more hopeful and inspiring perspectives (see the Inspiration circle) and still others strive for inclusive context with different perspectives for nuanced reporting (see the Nuancer circle). To some extent the three approaches overlap. 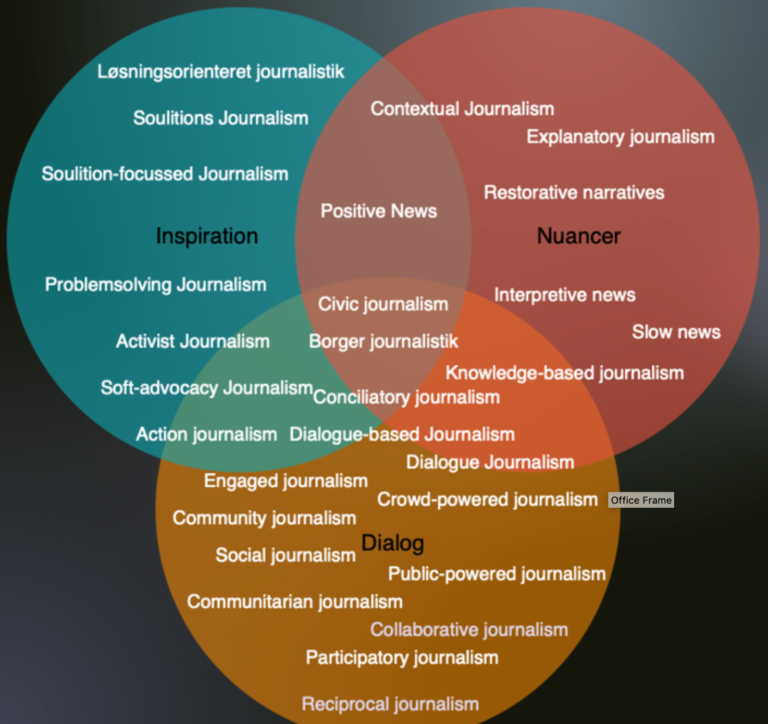